Alex Bright picked up his first ARDC Midget win of the 2013 season when the American Racing Driver’s Club rolled into Potomac Speedway, Maryland for the first night of racing.

Bright, who led all competitors with four wins last season, had been consistent through the first three ARDC events of the year – his best finish coming during the season opener at New Egypt where he finished third behind Steve Buckwalter and Bruce Buckwalter, Jr.  Bright is still ahead of his 2012 pace where his first win came in June at the Grandview Speedway.

Bear, DE competitor, Shawn Jackson not only led the twenty-five lap event but had pulled away to a straightaway lead.  Bright, who started eleventh at the green, lost several positions in the early going.  By the time he made his way to second, Jackson was long gone.  “When I got to second and saw how much of a lead he (Jackson) had,” Bright stated, “I knew I had my work cut out.”  But as luck would have it – good for Bright, not so for Jackson – a caution was needed, erasing Jackson’s advantage.  It was then that Bright noticed that Jackson had lost his edge.  “He wasn’t pulling down the staightaway like he had been.”  For Jackson, his #7 starting missing and popping.  “I didn’t know what was wrong.”  Jackson headed to the pits shortly after Bright took the lead.  It would be learned later that a broken spark plug had caused the issue in Jackson’s mount.

With Bright in the lead, the race was on for second as PJ Gargiulo and Trevor Kobylarz literally, ran wheel to wheel for the checkered flag.  “I did everything I could,” Gargiulo stated.  “I was determined that Trevor might push me across the finish line but I was going to finish ahead of him.”  “It was just good racing,” Kobylarz stated.

Bright took the win in his Joe Hemler owned, Lightcap Electric #77 .  Gargiulo picked up his first podium finish of the season with his second while Kobylarz finished third.  Ryan Greth earned his third fourth place finish of the season while Steven Drevicki salvaged a top five finish – crossing the line with very little air in either rear tire.

Tony DiMattia, an ARDC rookie this season, earned his best result of the season with a ninth place finish.

BRUCE BUCKWALTER, JR IS ALL SMILES AFTER WIN AT WINCHESTER

Bruce Buckwalter, Jr. turned over a new leaf on Saturday when he took the twenty-five lap ARDC feature at the Winchester Speedway and did so in convincing style!!

For the first time in his career, Buckwalter, Jr. was winless in 2012.  Despite many good runs, luck was just not on his side.  “When we finished, we had good finishes,’ Buckwalter, explained.  “But we had so many good runs when we just didn’t finish!”  But the winless streak was over as Buckwalter celebrated from the top of the roll cage on his BDB Construction #83.

Jimmy Glenn took command at the start of the twenty five lap main event and put some daylight between himself and second place contender, Tony DiMattia.  Dimattia had shed his rookie stripe over the weekend and was enjoying a strong run in second.  As Glenn pulled away, DiMattia was soon battling with Buckwalter who took over second on lap four after starting in the third row.

Buckwalter began to erase Glenn’s lead.  A caution was needed for Dusty Hiestand on lap.  Shawn Jackson relinquished a top five spot when he headed to the pits under the caution.  Contact on the restart sent the DeGre Engineering car of Steven Drevicki to the pits with a flat and another caution was needed.

Three times Glenn led Buckwalter back to the green flag.  On the third attempt, Buckwalter made his best move and was the race leader when lap eight was scored.

Buckwalter pulled away as the race passed the half way point with Glenn, Friday night winner, Alex Bright, DiMattia and Ryan Greth running in the top five and PJ Gargiulo and Trevor Kobylarz starting to challenge for a top five position.

A red flag was needed when Bright got sideways going into turn one, collecting DiMattia in the process.  DiMattia got upside down as Gargiulo and Greth were also collected.  Only Gargiulo was able to restart following the incident – caused when Bright’s arm restraints got caught inside something in the cockpit.

With just seven laps remaining, there was a lot of racing still to come.  Brett Arndt raced his way back to fourth after an earlier incident.  Kobylarz and Glenn put on a show for second as the two drivers used slide jobs to gain the second position.

With the checkered waving, Buckwalter raced to his first win of the season and fifth win in a row for the Elite Chassis built by Steve Buckwalter.  Kobylarz won the battle with Glenn who finished a strong third.  Gargiulo finished fourth with Arndt rounding out the top five.

ARDC action returns with the Eastern Storm at the Grandview Speedway on June 5th.

ARDC DOUBLEHEADER THIS WEEKEND
And a New Name on the Win List!

Steve Buckwalter has dominated ARDC action so far in the 2013 season.  Buckwalter is 3 for 3 in ARDC competition – picking up wins at New Egypt , Williams Grove and Port Royal already this season.

But with Buckwalter remaining in the Keystone State due to sprint car comittments this weekend, a new name will hit the 2013 ARDC Feature Win List!  Who will it be!

Trevor Kobylarz won his career first ARDC event at Potomac last season.  The second Potomac race was rained out after six laps and completed the next night at the Winchester Speedway – Winner, Tim Buckwalter!  Steve Buckwalter was the winner of the first race at Winchester last season and 2012 ARDC Rookie, Brett Wanner earned his first ARDC feature win at Winchester the second time around.  Will this weekend produce another first time ARDC winner?  Four races last season – four different winners!
So far this season, Bruce Buckwalter, Jr., Steven Drevicki and Kobylarz have run second to Buckwalter at New Egypt, Williams Grove and Port Royal respectively.  Alex Bright has one podium finish – a third at New Egypt.  Ryan Greth had two fourth place runs before a hard crash out of turn four at Port Royal.   Jimmy Glenn and Shawn Jackson have shown some mettle in 2013.  Nick Wean, Brett Arndt and PJ Gargiulo had season bests at Port Royal, finishing third, fourth and fifth.  Brenden Bright is looking to get his season on track.  Kyle Lick has the best finish to date of the 2013 Rookie drivers.
Who will it be this weekend at Potomac and Winchester Speedways?
Contact – Deb Smith

The Royersford Rocket, Steve Buckwalter, accomplished a task that hasn’t been seen in more than ten years by winning the first three ARDC events of the 2013 season. Six time ARDC Champion, Ray Bull opened the 2001 season with three wins during his second season of his six year run as ARDC Champion.
It was a beautiful night for racing in the idyllic setting of the Port Royal Speedway, nestled among the village and the surrounding mountains.
Topton, PA driver, Brett Arndt led the field to the wave of the green flag as he outgunned Mark Gilmore for the early race lead. Nick Wean made his move from sixth to second on the second circuit as Steve Buckwalter raced around the top to move into the third one lap later. After starting fifteenth, Buckwalter’s efforts were negated when Ryan Greth took a wild ride in turn four in the Steward #33, bringing out the red. Greth was okay and racing resumed with Arndt and Wean battling for the lead.
Wean took over the lead for lap three with Jimmy Glenn running second and Buckwalter making his way back to third. With five laps complete, Arndt and PJ Gargiulo completed the top five.
Glenn, a rookie contender last season, completed the pass by Wean to be scored as the race leader on lap five. Glenn was having the race of his career as he led the way through lap seven when Buckwalter came knocking. Buckwalter was the race leader on lap eight. With all of the focus on the front runners, Trevor Kobylarz made his way to third after starting ninth. As Buckwalter pulled away from the field, Kobylarz had his sights set on Glenn for second
Kobylarz took over second. Wean began to pressure Glenn for third with just five laps remaining.
The leaders caught up to the back of the field. As Wean made a move to the inside to challenge Glenn for position, they came up on a slower car. The two scrambled with Glenn getting airborne and taking a nasty ride in turn two. The race was red flagged but Glenn escaped without serious injury.
With three laps remaining, Buckwalter’s lead was erased as the top five – Buckwalter, Kobylarz, Wean, Gargiulo and Arndt lined up nose to tail. Buckwalter went on to the checkered followed by Kobylarz and Wean. Arndt finished fourth ahead of Gargiulo. It was a best finish of the season for the second through fifth place finishers.
Bruce Buckwalter, Jr. finished sixth after a race long battle with the Brenden and Alex Bright. Alex won the battle of the Brights to take seventh ahead of Brenden. Steven Drevicki finished ninth with ARDC veteran, Bill Courtwright finishing tenth.
Feature Finish (20 laps) 1. Steve Buckwalter 2. Trevor Kobylarz 3. Nick Wean 4. Brett Arndt 5. PJ Gargiulo 6. Bruce Buckwalter, Jr. 7. Alex Bright 8. Brenden Bright 9. Steven Drevicki 10. Billy Courtwright 11. Carey Becker 12. Kyle Lick 13. Shawn Jackson 14. Tony DiMattia 15. Jamie Spears 16. Joe Butera 17. Jimmy Glenn, Jr. 18. Steve Craig 19. Mark Gilmore 20. Ryan Greth 21. Jason Rice 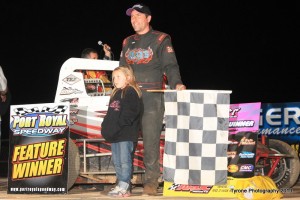 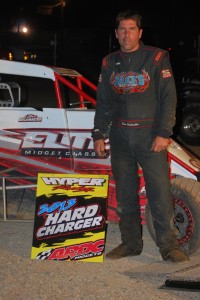