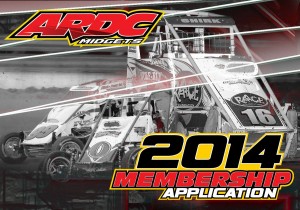 KOBYLARZ IS CROWNED AS 2013 ARDC CHAMPION

The American Racing Driver’s Club is rich in history as the oldest race sanctioning body in the United States prepares to celebrate its 75th Anniversary in 2014.
The Kobylarz name as been a part of that history for nearly twenty years.  Bryan Kobylarz captured back-to back Driver Championships in 1998 and 99.  Kobylarz then added a owner’s title in 2008 with driver Randy Monroe.  Trevor Kobylarz picked up his first ARDC Championship this season to add his own chapter to the history books.
Trevor Kobylarz decided a year ago that he would chase the title in 2013 after he finished second to 2012 ARDC Champion, Tim Buckwalter but won the Owner’s Championship for his R/T Racing car owners, Dyke and Carey Becker.  It was an ambitious goal but one the twenty year old Penn State student made sure to fulfill and Buckwalter was on hand to present the new champion his trophy.
Four feature wins highlighted the championship season for Kobylarz who went to Victory Lane at Susquehanna Speedway Park, Potomac Speedway, Bedford Fairgrounds and the Grandview Speedway.  Just as important as the wins were ten top five and fourteen top ten finishes that Kobylarz racked up during the season.
.
Finishing second in points was Steven Drevicki of Reading , PA – driver of the DeGre Engineering #19 owned by Greg Fitzpatrick.  Drevicki’s third place finish in the final race of the season – the Candy Bowl at Susquehanna – was enough to move him ahead of Bruce Buckwalter, Jr. in the standings.
The voice of the Action Track USA and Lanco Speedways, Barry Angstadt served as the emcee for the night’s events.
Announcements were made about the 2014 season and ARDC’s 75th Anniversary.  Seven race dates have been scheduled at the Grandview Speedway – three Thunder on the Hill programs and four special Sunday events on the high banks.  Maurice Bull addressed the gathering on be half of the Eastern Museum of Motor Racing who plans a 75th Anniversary Celebration at the museum at Lattimore Valley in mid-August.  ARDC will race at the Williams Grove and Lincoln Speedways that weekend as well as participate in events on the grounds of the museum.  Plans have been made to honor Crocky Wright during this celebration.
In addition to their Championship trophies, Kobylarz and the R/T Racing Team received the Bob Hilbert Sportswear Award. After accumulating the most points in that competition, Kobylarz will receive 100 white express race shirts from Bob Hilbert Sportswear.  Hoosier Tire Mid Atlantic presented Kobylarz and owners, Dyke and Carey Becker with Championship jackets from Hoosier Tires.
There were presentations made of several special awards.  PJ Gargiulo who serves as the Driver’s Representative on the ARDC Board of Governors presented Rookie of the Year honors to Tony DiMattia who competed in every event during 2013 and finished seventh in points.  Gargiulo also made the Most Improved Driver Award presentation.  This award went to Ryan Greth who finished fourth in points while debuting the new Hyper built midget this season.
Bryan Kobylarz received the Ken Hickey Crew Chief of the Year Award as the crew chief on the championship team.
The President’s Award was presented to Bruce Buckwalter, Jr. by former ARDC president, Ron Lauer.  The President’s Award honors someone whose service to ARDC follows the example of the award’s namesake, Galen Halteman.  Bruce Buckwalter, Jr. was honored for his service to ARDC and for his promotion of several causes through his midget.  Buckwalter has used his midget to promote awareness and raise funds for several organizations during the racing season.
For the first time, the Stan Lobitz Sportsmanship Award was presented.  The award was created to honor Lobitz who has shown unending support for ARDC and the preservation of racing history.  Lobitz was called upon to make the first presentation to Austin Burke.  The seventeen year old had planned to contend for Rookie of the Year honors in 2013 but a season ending injury during the first race event put an end to those plans.  But instead of being idle, Burke came to the races and offered his mechanical services to other race teams.  He spent much of the season assisting rookie, Tony DiMattia.
The Best Appearing Car Award was again selected by the fans and this year’s award went to the Buckwalter #83.  Buckwalter’s Stars and Stripes design was popular with the fans and collected the most votes at the track as well as on the Facebook vote.
ARDC Midget racing continues to be sponsored by Hoosier Racing Tires Mid Atlantic.  Other sponsors for the 2013 season were Bob Hilbert Sportswear and Hyper Racing who promoted the weekly Hyper Hard Charger Award.  Contingency sponsors are FS Motorsports, BDB Graphics, Kreitz Oval Track Parts, Inc., Mason Racing Ignitions, Keizer Aluminum Wheels, Lobitz Catering, Racebumpers.com, SBI Performance Fuel Systems, Thunderhead, DMI Sprint Race Components.com, Rays’ Yamaha, Roadrunner Race Fuels, CMC Custom Metal Coatings, Café Waldorf and Saldana Racing Products.
FINAL 2013 ARDC POINT STANDINGS
DRIVER
1 – Trevor Kobylarz
2 – Steven Drevicki
3 – Bruce Buckwalter, Jr
4 – Ryan Greth
5 – PJ Gargiulo
6 – Brett Arndt
7 – Tony DiMattia
8 – Alex Bright
9 – Kyle Lick
10 – Nick Wean 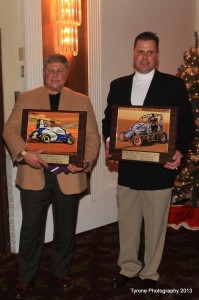