ARDC, Side by Side and 3 Wide!
Follow Us On Facebook!
Bright Overcomes Setback to Win First ARDC Event of the Season 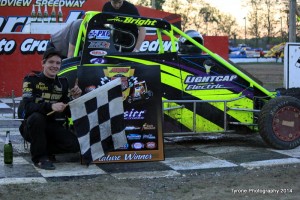 The night did not start out the way Alex Bright would have liked.
The young Collegeville, PA speedster started off his night of racing with a malfunctioning transponder.
Transponders are used by many speedways to electronically score race cars.  During timed hot laps, Bright’s transponder did not work, making it impossible to record a time for the driver of the Lightcap Electric #77.  As a result, Bright was slated to start 21st in the starting line-up.
Anyone who counted out Alex Bright at that point was sorely mistaken.
The American Racing Drivers Club (ARDC) feature event had the race fans on the edge of their seats from the wave of the green flag right down to the checkered.  Jim Radney and Shawn Jackson led the starting field to the start and battled for the lead from the wave of the green.  Jackson chose to run a high outside line while Radney stuck to the inside groove.  At different points of the speedway, each driver edged ahead into the lead.  Radney was the leader of record for the first six circuits with Jackson moving out in front for laps seven through nine.  Billy Pauch Jr. moved the Steward #33 to the inside to take the lead on lap ten as he was followed by Jackson, Radney, Kyle Lick and Ryan Greth.  Greth used a slide job to move up to third before taking over second ahead of Lick.  Lick then moved out in front to take the lead from Pauch Jr. on lap fourteen.  Lick’s view from the front was brief as Bright race through the top five to take the lead with just ten laps to go, followed by Lick, Greth and Radney.
While all of this action was going on out front, current ARDC point leader, Steven Drevicki was engaged in a three way battle for the top five with Nick Wean and Pauch Jr.  Greth took over second on lap eighteen.  Drevicki made an inside move to take over third from Lick on lap twenty.  With five laps to go, Bright was in command, followed by Greth, Drevicki, Lick and Pauch Jr.
As Bright drove away from the field, Drevicki moved in to take second from Greth before the checkered flag.  Bright raced to his first midget win of the 2014 season with Drevicki, Greth, Pauch Jr. and Lick determining the top five.
Bright became the third different winner in the three ARDC events so far this season – joining Steven Drevicki and PJ Gargiulo in that category.
ARDC action returns with four shows with the wingless USAC sprint cars when the Eastern Storm comes to the area.  Action begins with the Thunder on the Hill show at Grandview on Tuesday, June 3rd.  ARDC then competes in the Thursday night program with USAC at the New Egypt Speedway, followed by weekend shows at the Port Royal Speedway on Saturday, June 7th and Susquehanna Speedway Park on Sunday, June 8th.
FEATURE FINISH (25 LAPS)
1.  Alex Bright  2. Steven Drevicki  3 Ryan Greth  4. Billy Pauch Jr. 5. Kyle Lick 6. Bruce Buckwalter, Jr. 7. Jim Radney 8. Trevor Kobylarz 9. Nick Wean 10. PJ Gargiulo 11. Brett Arndt 12. Drew Heistand 13. Brenden Bright 14. Shawn Jackson 15. Brett Wanner 16. Tony DiMattia 17. John Barnett 18. Brian Gilmore 19. Tommy Kunsman 20.  Austin Burke 21. Clayton Glassman 22. Mark Gilmore 23. Bill Courtwright 24. Greg Fitzpatrick 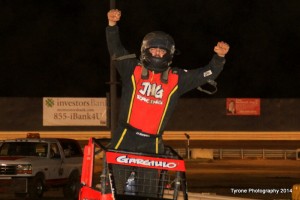 Can Steven Drevicki do it again?

Mother Nature has wreaked havoc on the 2014 American Racing Drivers Club schedule so far this season.

After weather forced the cancellation of the second and third show on the schedule – Williams Grove and Grandview – ARDC will return to the New Egypt Speedway where they opened the season in mid-April.

With seven time NES winner, Steve Buckwalter fulfilling 410 Sprint Car obligations in central PA, the Winner’s Circle will be up for grabs this weekend.  Steven Drevicki drove his brand new Elite Chassis #19 to the checkered flag and the win in the season opener.  Will he be able to put what he learned to use when ARDC returns this Saturday to the home of Thunder in the Pines?

There will be plenty of competition for Drevicki when the green flag waves.  2013 ARDC Champion, Trevor Kobylarz was sidelined from the opener after an incident early in the race.  Alex Bright was a race leader until engine issues sent him to the pits prematurely.   Brenden Bright finished second to Drevicki and will be looking to improve his finish by one position on ARDC’s return to NES.  Kyle Lick, Tony DiMattia and Brett Wanner rounded out the top five during the season opener, giving each driver his best NES finish to date.  Bruce Buckwalter Jr. made some late race moves, just missing a top five finish.  Rookie, Tommy Kunsman had an impressive first outing with ARDC with a strong seventh finish.  ARDC regulars, Brett Arndt, PJ Gargiulo, Ryan Greth and Nick Wean will be in the hunt before the checkered flag waves.  Jim Radney made his first start with ARDC at NES last season and drove to a top five finish in his debut.  The possibilities are endless!

Whatever the outcome, racing fans can be assured that there will be plenty of “three wide and side by side racing” that has become the trademark of the wingless warriors of ARDC midgets!