ARDC, Side by Side and 3 Wide!
York Haven, PA
5/28/2016
Alex Bright joined Brett Arndt and brother Brenden as 2 time winners with the Hoosier Tire Mid-Atlantic ARDC Midgets presented by Auto Bahn Indoor Speedway.
Jim Radney and Brett Wanner led the field to the green but before lap one could be completed Trevor Kobylarz took a wild spin down the front stretch ending his night.
On the complete restart Radney would lead lap one, as the rest of the field entered turn one Ryan Wilson flipped going into turn one bringing out the red flag.
When racing restarted the Hyper Racing teammates Jim Radney and Ryan Greth led the field to the green. Radney had the lead going into turn one before Greth would drive by taking the lead and started driving away from the rest of the field.
As Greth was pulling away from the field the battles for position were heating up behind him. Alex Bright made a successful slide job for second place on lap six and started his pursuit of Greth. Danny Stratton cracked the top five on lap eight after almost spinning and losing several spots earlier in the race.
The WSL INC. number 4 of Greth looked like he had the car to beat, but going into turn three of lap eight the power plant went up in smoke. For the second time this year Greth would be on fire at Susquehanna ending his chances for victory.
Alex Bright assumed the lead on the restart and never looked back taking the win followed by Radney, Brett Arndt, Danny Stratton and Justin Grosz.
Brenden Bright and Trevor Kobylarz took the heat race wins.
Susquehanna Speedway Bud Bricker Nationals Results:
5/20/2016
Pottsville, PA
Brett Arndt notched his second win of the ARDC season and first at Big Diamond with a thrilling last lap pass of Trevor Kobylarz.
The Steward racing number 33 of Danny Stratton and the Hyper racing number 4 of Ryan Greth lead the field to the green with Stratton jumping out to the early lead. Stratton looked strong in the early stages until Trevor Kobylardz showed him a nose going into turn one of lap five. Contact between the leaders sent Stratton spinning into the infield coming out of turn four bringing out the yellow flag and giving Kobylardz the race lead.
The Cafe Waldorf number 14 of Kobylarz took the green on lap six as the leader with Arndt and Alex Bright following. Kobylarz stretched his lead as the top five battled for position. Arndt slowly started to reel in the leader and moved under Kobylarz going into turn one of lap seventeen. Trevor pulled ahead with Arndt and Bright ready to pounce. As the field took the white flag Kobylarz slightly slowed up for the lap car of Shelby Harper and Arndt drove under him taking the lead on the back stretch. The leaders would go into the last turn with Kobylarz trying to dive back under Ardnt but it wasn’t enough as Arndt took the checkers for the win.
Alex Bright crossed the line 3rd, Billy Pauch Jr. in the Heffner racing #27 was 4th and Ryan Wilson finished 5th after battling Pauch for 4th.
ARDC Big Diamond Results:
DNS: #5 P.J. Gargulio, #21k Tommy Kunsman
Danny Stratton and Ryan Greth took the heat race wins 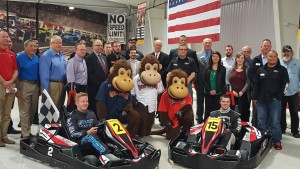