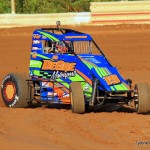 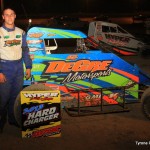 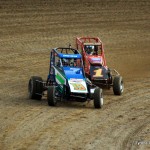 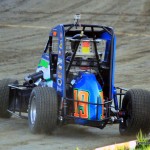 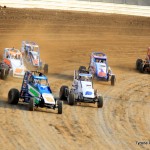 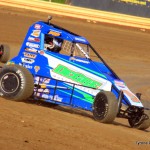 The 2013 season proved to the be the best – so far – for Reading driver, Steven Drevicki.
After a season of engine issues sidelined the young racer from many top finishes in 2012, an Esslinger powerplant was put under the hood of the DeGre Engineering #19 for the new season.  It’s reliability allowed Drevicki to concentrate on improving the cars handling performance and finish races.
Drevicki accumulated more top five and top ten finishes than any other competitor in the 2013 season.  The difference between Drevicki and Trevor Kobylarz in the Championship came down to feature wins and races finished.
Drevicki has been competing in ARDC midget competition since the 2010 season.  His rookie class included the likes of Tim Buckwalter and Alex Bright.  In 2011, Drevicki was named ARDC Most Improved Driver, going from fifteenth to seventh in points and picking up his first two ARDC victories at Penn Can and Big Diamond Speedways.
“This is our best finish in points.  We went from eighth last year to second this season,” Drevicki stated.
Certainly one of the highlights of the 2013 season was Drevicki’s win at the Winchester Speedway in Winchester, VA in August where he battled with Alex Bright for the win.  “We’re consistent with Steve, Trevor and Alex and that’s where you want to be.”   Drevicki stood on the podium seven times during the season with one win, one second and five third place finishes.
While a feature win was earned during the August trip to Potomac and Winchester, the weekend was not without its challenges.
Driving one of two DeGre Engineering entries for car owner, Greg Fitzpatrick, Drevicki is very pleased with the performance of his team.  “Greg and I have a good car owner – driver relationship,” Drevicki continues.  “My dad, Dave Drevicki, is the one who holds everything together.”  While Steven graduated from Penn State in spring with his engineering degree, instead of classes his days are now consumed by work.  “I’m around more but with my work schedule and Greg’s, it’s my dad who keeps everything running.”  Ftizpatrick agrees.  “Dave does 85-90% of the work on both cars,” Fitzpatrick states.  “Scott Gantert takes care of the tires and stagger.  He’s the crew chief on the #28 car (Fitzpatrick’s car) but we all put most of our effort into the #19.”  Kerry Pauley is the third crew member on the DeGre Engineering team.  Steven’s mom, Stephanie, is always at the track to help out and to cheer Steven on.
“I think we’ve shown that we have our ducks in a row as a team – with the results that Pauch Jr. had in the #28 combined with the performance of the #19.” Fitzpatrick commented.
In past seasons, Fitzpatrick made sure that Drevicki’s grades in school were without reproach.  Since graduation, that motivation has been lost.  “We did light a fire under him about racing in the heats,” Fitzpatrick says.  “We were letting too many points on the table in our heat races.  I guess it worked because
Steven had five consecutive races at the end of the season with heat wins.”  Drevicki led all competitors with seven wins in qualifying races.
Fitzpatrick and the Drevickis have been a team since their 600 Micro days.    Fitzpatrick is not one to let an opportunity for humor get away from him.  The new slogan around the shop has something to do with race car drivers being like light bulbs – when one gets dim you change it. It’s al in fun and a way to keep the driver on his toes.
Sponsorship on the #19 comes from DeGre Motorsports, DeGre Engineering, Kz Customs, GME, Champion Racing Oils, Esslinger Engineering, Viper Chassis, Bob Hilbert Sportswear, TSL Shocks and BDB Graphics.
“I want to thank everyone who has helped us throughout the season,” Steven adds.  Steven recognizes the support that his parents have provided throughout all of his racing through the years.  They have been and continue to be an integral part of Steven’s racing experience.  He appreciates the help and support that Fitzpatrick has provided for the team as well as the many hours that Scott and Kerry devote to helping to prepare the cars – both at home and at the track.
There is a lot of anticipation for the 2014 season.  Drevicki qualified for the A Main on his qualifying night at this year’s Chili Bowl which is just the first of several travel events that the DeGre Engineering team plans to make this season – .including Midget week and the Gold Crown.   There are plans for new cars with Elite chassis on order from Steve Buckwalter.
The have laid a strong foundation in 2013.  Now they are ready to build on that foundation in 2014.