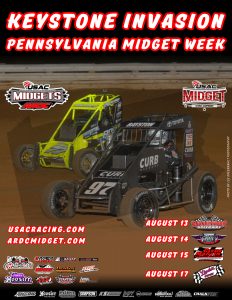 Adam Pierson is interviewed after his Susquehanna win.

York Haven, PA……..Adam Pierson of Bradford, Vt. picked up his second straight USAC Regional Midget race pesented by ARDC Saturday night at Susquehanna Speedway, leading the final 10 laps to win the 20-lapper over Ryan Greth, Tommy Kunsman Jr., Brett Arndt and P.J. Gargiulo. Arndt led the first 10 laps. Alex Bright was treated and released from a nearby hospital after being struck by a broken drive line. Newmanstown, PA –  Perhaps Alex Bright just enjoys races that fall on the first of the month, or maybe he shines when the track is heavy and super-tacky. Or, quite possibly, he is just that darn good when the USAC Eastern Regional Midgets presented by ARDC compete at Lanco’s Clyde Martin Memorial Speedway.

Bright, from Collegeville, Pa., stormed to victory in Saturday night’s Star Spangled Havoc event at the Clyde. It was his second consecutive triumph in the event that is held annually on the Independence Day holiday weekend, and his fourth straight stand-alone USAC/ARDC win at the Newmanstown oval. With the victory, Bright also becomes this season’s first two-time winner on the USAC/ARDC traveling circuit, adding to his April 1st triumph at Clyde Martin. And, to say that he scored a convincing win on Saturday is a serious understatement, as last year’s point champion lapped up to the fourth place finisher in the 30-lap A-Main.

“I knew I had to get to the front before Ryan did,” explained the winner, referring to runner-up Ryan Greth. “He’s really good, as everybody saw, and I had to work hard early to beat him to the lead.”

On the initial green, Bright darted from fifth to third as the inside lane opened up on the homestretch. At the same time, Adam Pierson moved from fourth to second as pole sitter Kenny Miller III dashed into the top spot. With one lap in the books, Bright ducked under Pierson in turns one and two. They rubbed wheels and Pierson spun as they exited the corner, bringing out the yellow flag.

On the restart, Bright threw a huge slide job on Miller, taking the lead as they blasted off turn two. Greth, who started sixth, was soon in position to challenge Miller for the runner-up spot, and seventh-starting Kyle Spence made it a three-car tussle before the next caution period with seven tours complete.

The ensuing restart provided Greth with the opportunity to try and steal the lead from Bright. Greth threw a slider in one and two, only to have Bright cross him over and nearly pull alongside on the backstretch. Greth held him off momentarily, but Bright countered Greth’s slider with one of his own in three and four to reclaim the lead. Greth tried to swing back under Bright on the front chute, but Alex shut the door on him as they entered turn one. Now securely back in front, Bright motored away from Greth and put on a fan pleasing, breath-taking show as he pounded the cushion (and sometimes hopped over it) in rim-riding style at both ends of the speedway.

The race went green from lap eight through the 27th circuit when Eric Heydenreich flipped in the fourth turn, causing a red flag situation. The tumble was not too serious and, once his car was put back on all four wheels, Heydenreich was pushed off and rejoined the field. Since he was one of only four cars on the lead lap at the time of his mishap, Heydenreich restarted and eventually finished in fourth place.

At the checkered, it was Alex Bright winning by more than three-seconds over Greth. “He’s just awesome here, ” said Greth afterward as he pointed towards the winner. “We had that one shot at him, but we’ll take second tonight and count it as a good points night. I am taking these races one at a time, but it’s hard not to think about the points thing when you are in our position.” Greth recently took the USAC/ARDC point lead, leap-frogging over Bright after a pair of top-ten finishes at Williams Grove on June 15 and 16.

Kenny Miller III, a rookie on the tour this season, recorded his best-ever finish by placing third. “I’m definitely feeling more comfortable in these things (Midgets) and much more comfortable running with these guys. I know this track well so I thought we could have a real good race tonight, and it worked out pretty well.”

Heydenreich rebounded after his flip to finish fourth, the last car on the lead lap. A wild three-car battle for fifth ended with Shawn Jackson narrowly beating Jimmy Glenn and Jay Hartman to the stripe.

This was the final tune-up for the mighty Midgets (at Lanco’s Clyde Martin Memorial Speedway) before the Tuesday, August 15 event featuring the cars and stars of the USAC National Midget Championship. The second annual Battleground: Lanco event will pit Bright, Greth, and the rest of the local Midget competitors against the best of the midwest, including last year’s Battleground victor Tanner Thorson, who will once again pilot one of the potent Keith Kunz Midgets during PA Midget Week.

Advance General Admission tickets for Battleground: Lanco are now on sale. They will be available at the track each Saturday, and mail order information is posted on the website: www.clydemartinspeedway.com.

Advance tickets will enable the holder to enter the facility one hour prior to walk-up ticket buyers so that blankets can be put down to save seats. Advance ticket holders will also be permitted to go into the pits for approximately two hours before the action begins.

The Hyper Racing Wingless 600 Sprints will join the USAC National Midgets on August 15.

**Meseraull flipped at the start of the finish.

ALSO AT THE TRACK: Rohan Beasley (#14B Beasley),

**Rice flipped during the second heat.